Some people said it couldn't be done... 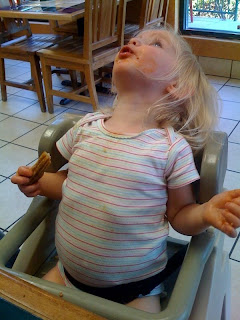 Wednesday night was gymnastics for Sophia. Steve showed up early just like I asked, however, DB looked more like a dumpster diver than a gymnastics superstar. I guess I shouldn't have been too taken aback since she comes straight from 8 hours of day care fun. I've often wondered why the other mom's won't talk to me and I guess it could have something to do with the black dirt between her toes.

This turned out to be her best performance day. She ran through the forward rolls, donkey kicks, jump spins and arabesque. We moved on to the trampoline and wall climbing, when lo and behold, her diaper gives up and leaks a huge amount of pee-pee onto her pants. That was the final straw. I had to remove trash baby from the class before everyone started pointing.

Steve and I have a new game plan. We will both carry an extra outfit, diapers, comb, hair ties and wet wipes. My friend, Kim, was a little distraught by the photos and she's going to give us gymnastics outfits to wear. It was either that or Kim said she would be responsible for picking up Sophia to make her presentable. See? Even people that aren't at the class are embarassed for us.

Following the diaper incident we had to get some food. The closest restaurant was Rubio's where the appetizers consisted of Cheetos. These resulted in the singing and rolling around you see above. Note the lack of pants. Onto Thursday. 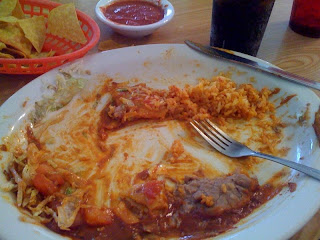 Today was a red letter day! Tasha deigned to have a lunch date with me, only because her lunch room was off limits due to interviews, but I will take what I can get. We went to La Frontera, which was my 3rd visit in 6 days. I may have a problem. My heart hurts a little. We had some good laughs and parted ways.
Posted by Abbey Harper at 8:01 PM

Ok, now I know what you mean...if you have all these meals, how come she is so skinny!! I want to see some George!