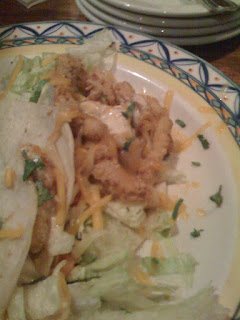 It's been a whirlwind couple of weeks, but hopefully it has finally come to an end. I was in Dallas for the hurricane (I don't really recommend it) and I spent a good deal of my waking hours on Friday at Scrap Fest 2008 (also not recommended).

I was in Dallas for the TriZetto Facets User Group Enhancement Survey Review. Whew! Essentially all of the users get together and read word for word the enhancements that were submitted and if someone has questions people pretend like they know what the enhancement involves. So super fun! I met a few new people and got to meet up with my awesome friend Tina who was also there for the user group meeting. It was almost like a free vay-cay but I had to talk about work to get it.

We had tons of refugees staying in the hotel, the University of Houston football team along with their support staff and regular joes with their pets who pooped in the lobby. I have to say the pooping was quite hilarious, but that's because it wasn't my pet. The only time any of these people talked to us was when we would scratch off our lotto tickets in the lobby. They were so intrigued that out-of-staters would play the lottery. Hello! It's like totally the most fun you can have at a hotel!

Trizetto took a bunch of us out for dinner and drinks to watch the Cowboys game on Monday. The hotel recommended a restaurant/bar down the street but I think the concierge was getting paid by the restaurant manager to recommend the place. I ordered fish tacos and it was more like bottom-of-the-barrel fish bits tacos (see above). The people were on fire for the game! I never heard so much shouting in a restaurant. Texans are serious about their football. 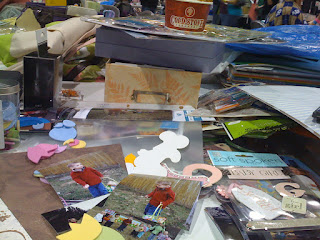 The following Friday I attended Scrap Fest in Sandy. Scrap Fest is where all the new papers and scrappin' materials are presented for your purchase and the true crazies can bring all their stuff and scrapbook right away. I had never been so I was really excited. Little did I know how loud and crazy it would be. First thing they have an announcer who comes over the speakers to cheer on scrappers. Then he announces that there is a t-shirt contest.

OH the contest! If you had a t-shirt with a scrapbook theme then you were able to enter. 20 people got up on the stage and had their t-shirts screamed over the PA for us to then cheer back if we liked it. Here's a sample:

"Why do a workout when you could do a layout?"
"Anything you can scrap I can scrap better"

I would go on, but I got sick typing those. This went on for 15 minutes with the group getting smaller and smaller as the person with the smallest cheers was eliminated then the shirts WOULD BE READ AGAIN! Dear Lord, it was painful. Of course, I went home and got all my scrapbook stuff and went back. I'm sick.
Posted by Abbey Harper at 6:51 PM

Abbey! That picture is GROSS!! And can you even wait until next weekend??!!