I made paella for the second time ever this evening. The first time I made it didn't work out too well. The rice never fully cooked and the flavor was somewhere along the lines of "I guess this could be good???". I found a vegetarian paella recipe on epicurious. The only struggle I had was finding frozen artichoke hearts. In the end (read three stores later) I used artichokes hearts bottled in water. 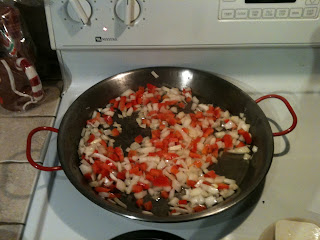 I made Steve cut the onions up for me. I'm the perfect customer for the onion goggles. 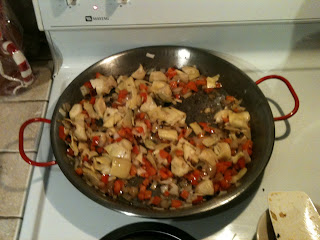 Things went a little better this time, I don't know if it's because I actually followed the recipe. I usually like to do my own thing after getting a general idea from one. By this point the onions and red pepper smell amazing. I've still got about half an hour until dinner so I busted out the Triscuits. 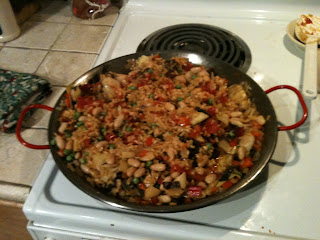 Here's the final outcome. It was fantastic. After serving it up for everyone else I added some crab for myself (I picked up king crab legs at Costco). I enjoyed it with and without the crab-the flavor is great either way. I highly recommend this recipe. If you don't have a paella pan, you may also use a large frying pan.
Posted by Abbey Harper at 8:27 PM 1 comment: