I was so hungry when I got home I was hoping that Steve would call and say he was picking something up. Too bad I didn't put that out into the cosmos earlier in the day because he was nearly home when I called. I decided to make the first few things that were I saw in the fridge.
The first was left over salad from the day before, not really worth showing you here. The second was asparagus. The trimmed asparagus was placed in a pan of water with about 2 tablespoons of butter, pepper and some lemon juice. I cook this until the color becomes a rich green. I don't know what it is about cooking it this way but I usually eat a couple before serving it to anyone. It is so good! 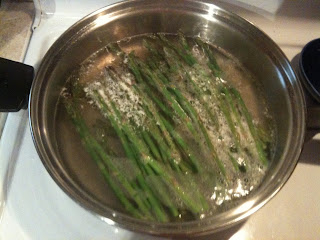 The second item was a little experiment. I took some frozen hash browns and baked them at 450 degrees for 18-20 minutes. Then I whisked 12 eggs with 2 cups of sharp cheddar and pepper. I had some frozen breakfast turkey sausage which I sauteed with green onion. Once I realized that wouldn't be enough I took the Aidell's sausage I had left over from a barbecue on Saturday and sliced that up as well. This was all mixed together and poured over the hash browns.
Waiting.... 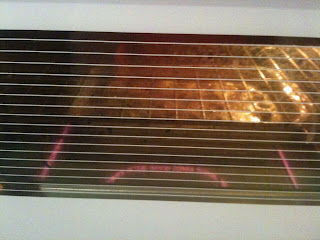 It was pretty good, but not as flavorful as I thought it would be. It needs more onion and some green pepper in the mix. I added a side of salsa and it definitely made all the difference. Now I have leftovers for the week. 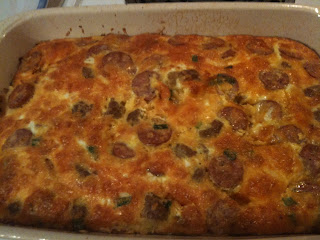 Three things:
Since when is this a food blog??
And I don't ever want to hear that you don't know how to cook. Dork!!
Next time you make a casserole that looks like that, I better get some!!